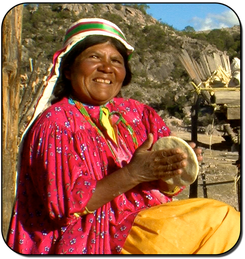 Roseangela; Rarámuri
Roseangela is proficiently skilled in traditional Raramuri culinary practices. She stars as the main cook in Goshen, who beautifully demonstrated the endurance and artistry of her ancestral recipes including how to make Pinole and handmade corn tortillas. Roseangela's joy is contagious while she prepares indigenous food using only her hands, metate, and clay pots over an fire. 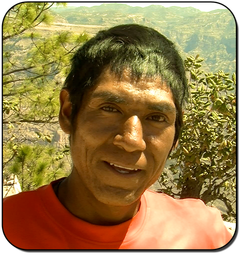 Arnulfo Quimare; Rarámuri Runner
One of the world's greatest endurance athletes, Arnulfo Quimare is a legend Tarahumara runner. Featured in Born to Run, Christopher McDougall's best-selling book about the 2006 Copper Canyon Ultra Marathon, Arnulfo gained his world renowned reputation by winning this race. Every year, he still continues to run what is now called the Ultra Maraton Caballo Blanco, a 50 mile foot race in Urique, Chihuahua, Mexico. Arnulfo lives and grows food in Quisuchi, a small town deep in the Copper Canyons, Mexico. 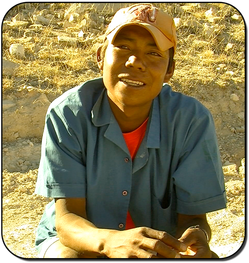 Margarito; Rarámuri
Margarito was Dana & Sarah's translator and guide during their time filming Goshen in Ruárachi one of the most rural communities without electricity, water, tiendas, or roads in the Copper Canyons, Mexico. His incredible energy to journey through the canyons, remarkable patience with communication, and genuine enthusiasm about being involved in the production of Goshen inspired trust and openness from his entire community. He help coordinate the Rarájipari, the Rarámuri men's traditional ball running game, and the Ariweta, the Rarámuri women's traditional hoop running game which are documented in Goshen.

Christopher McDougall; Author of Born to Run
Christopher is an American author and journalist best known for his 2009 best-selling book Born to Run: A Hidden Tribe, Superathletes, and the Greatest Race the World Has Never Seen. Born to Run is that rare book that will not only engage your mind but inspire your body when you realize that the secret to happiness is right at your feet, and that you, indeed all of us, were born to run. He has also written for Esquire, The New York Times Magazine, Outside, Men's Journal, and New York, and was a contributing editor for Men's Health. He runs mostly in bare feet among the Amish farms in rural Pennsylvania, where he lives with his wife and two daughters, plus a constantly expanding population of cats, turkeys, ducks and chickens. 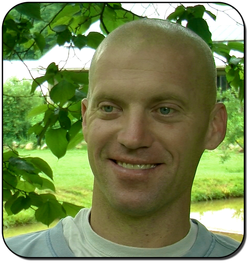 Will Harlan; Executive Director of Barefoot Seeds
In 2005, Will and his wife Emily founded Barefoot Farm, a nonprofit that provides organic produce to families in need, promotes sustainable agriculture and ecology, offers health and nutrition education in Asheville, NC. The farm also directly assists indigenous Tarahumara farmers by providing them with native varieties of corn and bean seeds, basic tools, and assistance with water resources and land protection. 100% of all farm proceeds and donations to Barefoot Seeds go directly to building grassroots seed banks, conservation farms, and clean water systems in the Tarahumara's ancestral homelands. Each year, Will journeys to the Tarahumara’s ancestral lands to to provide seeds and to share the trails with the legendary, huarache-clad Tarahumara, running traditional ball races and ultra runs through their steep, ancestral canyons. 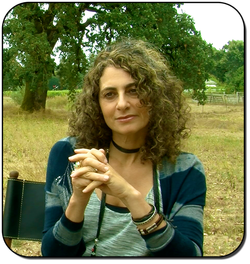 Dr. Daphne Miller, Author of The Jungle Effect & Farmacology
Daphne Miller, MD is a family physician, writer, and Associate Professor in the Department of Family Medicine at the University of California San Francisco. In 2000 she founded WholefamilyMD, San Francisco’s first integrative primary care practice, where she still cares for patients across the lifespan. In her latest book, Farmacology: What Innovative Family Farming Can Teach Us About Health and Healing (2013), Daphne discovers how learning from sustainable farmers can make her a better doctor. Her first book, The Jungle Effect: The Healthiest Diets From Around the World - Why They Work and How to Make Them Work For You (2008), a Northern California Bestseller, chronicles her voyages to areas around the world that are still relatively free of modern chronic diseases. Daphne lives in Berkeley, California, with her architect husband, Ross Levy, and two teenagers, Arlen and Emet. Most days after work she can be found walking in Claremont Canyon or tending to vegetables and fruit trees in her garden. 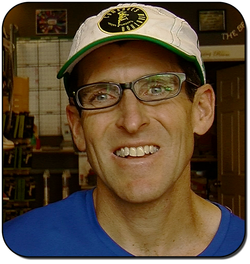 Dr. Mark Cucuzzella; Director of the Natural Running Center
Mark Cucuzzella is a Professor of Family Medicine at West Virginia University School of Medicine. As a Lieutenant Colonel in the Air Force Reserves, he is designing programs to reduce running injuries in military personnel. Mark has been a competitive runner for 30 years, completing over 70 marathons and ultras, and continues to compete as a National level Masters runner. He attributes much of this longevity to good running form and minimalist principles. He is executive director of the Natural Running Center, an education portal and network of stores designed to teach healthier running and promoting more natural footwear. Mark also owns Two Rivers Treads- A Center for Natural Running and Walking in his hometown of Shepherdstown, West Virginia. Mark’s innovative work and story has been featured in the New York Times, NPR, Outside Magazine, Running Times, Runners World, Air Force Times, the Washington Post, JAMA, and other medical and media outlets. 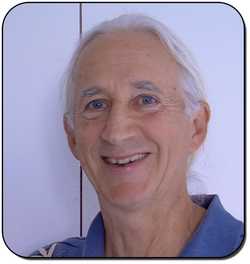 Dr. Philip Maffetone; Author of The Big Book of Health & Fitness
Dr. Maffetone is an internationally recognized researcher, educator, clinician and author in the field of nutrition, exercise, sports medicine, and biofeedback. Dr. Maffetone was named coach of the year by Triathlete Magazine, and honored by Inside Triathlon magazine as one of the top 20 most influential people in endurance sports worldwide in the 20th century. Dr. Maffetone still lectures on diet, nutrition and stress management, and teaches biofeedback to health practitioners. He is the author of over 16 books. In 2003, Phil became a songwriter, and began working with producer Rick Rubin, a relationship that continues today. Along the way, he worked with Johnny Cash, the Red Hot Chili Peppers and a variety of other professional musicians. His personal website (www.philmaffetone.com) includes his music and a large collection of articles on music, health and fitness, including his Off The Grid writings, which are commentaries on social and environmental health. 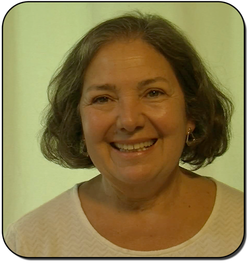 Dr. Maria Teresa-Cerqueira; Chief of Pan American Health Organization
Maria received a Ph.D. in food and nutrition policy from Cornell University, NY, 1996; a M.S. from the University of Iowa, 1975; and the B.S. from the Florida State University, 1973. Maria participated in Dr. William E. Connor's clinica research studying the Tarahumara diet. The American Journal of Clinical Nutrition published two studies by Dr. William E. Connor's research team: The plasma lipids, lipoproteins, and diet of the Tarahumara Indians of Mexico and The absorption of cholesterol and the sterol balance in the Tarahumara Indians of Mexico fed cholesterol-free and high cholesterol. The New England Journal of Medicine published: Changes in Lipid and Lipoprotein Levels and Body Weight in Tarahumara Indians after Consumption of an Affluent Diet. 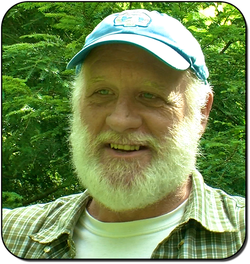 Mickey Mahaffey, Manager of Barefoot Seeds
Mickey is the manager of Barefoot Seeds farm and seed bank in Copper Canyons, Mexico. Originally from Hendersonville, North Carolina, Mickey has lived among the Tarahumara tribe in Urique for nearly 2 decades. Mickey is essential in providing the seeds and tools to enable Tarahumara to continue their traditional farming and running culture. 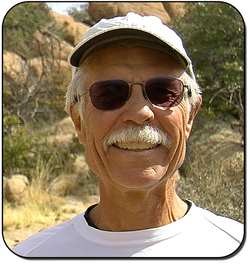 Dr. Wayne Coates, Author of CHIA: The Complete Guide to the Ultimate Superfood
Dr. Wayne Coates is Professor Emeritus in the Office of Arid Lands Studies at The University of Arizona and is perhaps the world's foremost educator of chia seeds. Owner of AZChia, a family owned business that has been importing and selling chia since 2007, he was among the first to grow chia experimentally and for commercial purposes. All of AZChia seed comes from South America and is non GMO, raw, gluten and pesticide free. In 2002, he wrote Chia: The Complete Guide to the Ultimate Superfood which chronicles the history and health benefits of chia. He continues to do research on chia to this day in with his wife Patricia in Prescott, AZ. Their goal is to bring the highest quality chia to the public at the best prices possible. 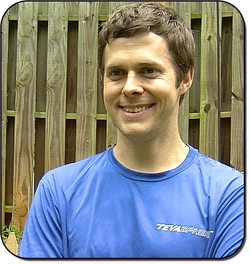 Matt Frazier; Founder of No Meat Athlete
No Meat Athlete was founded in 2009 by Matt Frazier, at about the same time he went vegetarian. Six months later, Matt qualified for the Boston Marathon with a time of 3:09:59 at the Wineglass Marathon, over 100 minutes faster than his first marathon time seven years prior. In June 2010, Matt ran his first 50-mile ultramarathon, and has run several more ultras and marathons each year since. When he’s not running, cooking, or blogging, Matt enjoys reading, gambling, music, and brewing beer. He lives in Asheville, North Carolina with his wife, son and two rescued dogs, and is the author of the book, No Meat Athlete: Run on Plants and Discover Your Fittest, Fastest, Happiest, Self.